HAPPY ENDING: Or Not 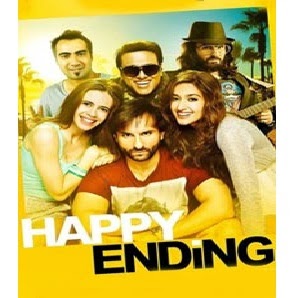 About ten minutes into Happy Ending, the new film from writer/director duo Raj Nidimoru and Krishna DK, I recalled with a pang my high expectations for and indifferent response to their last movie, Go Goa Gone, which also starred (and was produced by) Saif Ali Khan. Saif was funny in that one as a blond zombie-killer with a faux Russian accent. Overall, though, Go Goa Gone felt like a sketch that lasted much too long. Raj and DK’s earlier 99 and Shor in the City remain favorites of mine, films with heart and soul and danger as well as comic timing, so GGG’s sogginess was a particular disappointment.

I had forgotten all about Go Goa Gone until Happy Ending got into its introduction of Saif Ali Khan’s callow Yudi, who loves the ladies but is such a commitment-phobe that he alienates every girlfriend the moment she says “I love you.” A film about such a lad is not, shall we say, an especially fresh idea. Yudi, who narrates, breaks up with an adoring Kareena Kapoor and then launches into a rant about men being like dogs, of which there are apparently two types: lap dogs and street dogs. <counter-rant>This bogus two-typing irritates me first on behalf of dogs, many of whom are neither spoiled and overfed nor happy to be “free” to scavenge and suffer, and second on behalf of men and women everywhere, who are the same species, after all. I’m deeply tired of assumptions about what women want from men and how women’s wanting inevitably makes men miserable. GAAHHHHH</rant> Watching this, I suddenly remembered that weak film Raj and DK had made in the years since Shor in the City.

The supporting actors in Happy Ending are players I’m almost always glad to see, so I wish that they hadn’t been given roles that further solidify the women-want-to-domesticate, men-want-to-be-free storyline. Kalki Koechlin is amusingly terrifying as a stalker-girlfriend-dentist who refuses to believe Yudi has broken up with her, but when she tries to manipulate Yudi into marriage by claiming she’s pregnant, my patience with the character became very thin. Preity Zinta has even less to work with as the motherly ex who is willing to put her own family life on hold in order to let Yudi cry on her shoulder for no apparent reason. Ranvir Shorey is a miserable cartoon of a best friend who acts as if his wife is keeping him on a leash and, when released for an evening, demonstrates that he needs further housebreaking.

But then there's Govinda. In a small role as over-the-top Bollywood star Armaan, who hires Yudi to multiplexify his single-screen career, Govinda has the time of his life. I am not likely soon to forget the scene in which Armaan ji takes simultaneous meetings with his writer and his plastic surgeon, parading around shirtless with the surgeon’s pre-op Sharpie marks all over his flabby torso and middle-aged face. Props to Govinda for his willingness just to be middle-aged on camera in spite of all the Salmans, Shahrukhs, and Aamirs who have made being forty-plus look so strenuous (even if there is a presumably CGI follow-up scene in which Armaan displays his far more chiseled post-surgical self).

Other small grace notes finally made this a more likable film than I expected after the disappointing start. Saif Ali Khan is loose and easy in a double role as buff Yudi and schlubby Yogi, who may be Yudi’s socially awkward twin or may be a manifestation of Yudi’s inner couch potato (I do wish the screenplay had made it clearer whether this was a real person or a figment of Yudi’s imagination). Leading lady Ileana D’Cruz, who seemed mostly waif-like in Barfi, where she had the misfortune to be cast as the non-disabled character admiring the leads’ enduring love from afar, here has a chance to show a bit of spark. She and Saif Ali Khan have chemistry in a goofy mutual seduction scene—and her character, Aanchal, isn’t nearly as drippy as the godawful prose she has to present at readings of her hit novel. (I know there’s a joke in there about how bad bestsellers can be, but why should her book bore even the people who come to her readings?) Aanchal is no romantic; she’s even more resistant to love than Yudi is, and unsurprisingly, he soon finds that he doesn’t want to live without her.

The ending for Yudi and Aanchal seems happy enough, but Yudi's voiceover points out that the key to a "happy ending" is simply stopping at the right place. There are no guarantees about what will happen afterward.  It's a weird, if potentially thoughtful, note to hit at the end of a romantic comedy.

The film’s meta-story, which purports to be Yudi’s Hollywood notes for Bollywood king Armaan, moves at a leisurely pace and vanishes altogether at regular intervals. Its meandering path only bothered me because I’m a great admirer of the tightly interwoven storylines of 99 and Shor in the City and of the way those two films adroitly mixed great comedy with cold fear. Both films offered happy endings that were not just upbeat, but immensely satisfying.* Happy Ending moves from hardcore cliché toward something more nuanced, but that move somehow makes the film feel as if it simply hasn’t decided on an ending at all.

Damn it, I want closure!


*I saw Raj and DK at the New York premiere of Shor in the City (then called simply Shor), and after the showing the mostly NRI audience gave the directors a grilling about the lack of “realism” in the ending. The filmmakers pointed out that happy endings are not inherently more unrealistic than unhappy ones. I can’t help wondering, though, if the films they’ve made since Shor have been affected by the festival-goers’ grumbling. Raj and DK, ignore New Yorkers, please! Except me, of course.