After several weeks during which an online course ate up all my free time and there was precious little Bollywooding, I am celebrating the (presumably imminent) arrival of SPRING here in the northeastern US by working my way through a box of comedy DVDs sent my way by the wonderful Supraja*!

First up: a film I tried to watch years ago and so did not get, Andaz Apna Apna. This film stars what today would be a deeply unlikely comedy duo, Salman Khan and Aamir Khan. Even in 2002, renting this from my local Indian grocery, I didn't quite see how Lagaan plus Hum Aapke Hain Kaun could equal anything remotely coherent.... And I ended up flummoxed and not very amused. (Others whose tastes I admire have had similar qualms, including the excellent Beth Loves Bollywood.)

But if Supraja says that this film is a favorite--and if dozens of other writers praise it as one of India's funniest comedies--then I must give it another go! So here's what I think after revisiting this film ten-plus years into Hindi film fandom.

Coherent? OK, it's still not very coherent, or at least not for a gori filmi-fan. And Andaz Apna Apna will probably never be considered great filmmaking by anyone, no matter how fondly fans recall it in the coming decades. (Continuity people, please note that  real hair does not become shorter, longer, and then shorter again over the course of a weekend.) But the good news is that if you're in the mood for something very silly, and if you have seen a lot of Hindi movies, or Sholay several times, then you'll probably be able to move this from the "Wha...?" column to the "Ha!" column. You just might need to watch this one.

We begin with Aamir, as Amar, cycling along in shorts, and aai la! running into stranded film heroine Juhi Chawla (who was Juliet to Aamir's Romeo in Qayamat Se Qayamat Tak). He rescues her and wins her heart, but even in this dream sequence Amar is a gold-digging layabout:

When Amar wakes up, he's revealed to be a good-for-nothing who steals money from his hardworking dad's barbershop so he can blow it (or "blow it up," as the subtitles say) on fancy haircuts.

Next we're introduced to Salman as Prem, who is swiping money from his father, a tailor, to pay off a swindler who pretends he has film-world connections and will make Prem a big star. This provides an excuse for a series of hilarious Salman headshots--this trio pretty much sums up his career so far (yet I find him ridiculously charming here). Clearly, we've departed from the Romeo and Juliet Shakespeare plots and moved to the implausible wacky Shakespeare comedies, and Andaz Apna Apna plays to the groundlings. Amar and Prem both hear about Raveena, an heiress who has come to India from London in the hope of finding a nice Indian boy to marry. Both of our "heroes" sell their father's businesses and run off with Dad's money, hoping to marry the rich girl. Amar and Prem meet and discover the things they have in common (i.e., lying, laziness, and a desire to marry an heiress). They play some dirty tricks on each other before deciding to join forces to defeat the other thousand or so young men who are lining up to be Raveena's choice.

Raveena Tandon and Karisma Kapoor play Raveena and her secretary, Karisma, or possibly they play Karisma and her secretary, Raveena. (None of the main characters in this film are exactly who they say they are, so this confusion is par for the course.)

Once the other suitors are dispatched, Amar finagles his way into the heroine's house by faking amnesia, and then Prem pretends to be a doctor who pretends to cure him. Salman in particular appears to be having the time of his life in this scene. He gets to slap and throttle Aamir and threaten him with an injection meant for horses.
Salman's enthusiasm for Karisma's suggestion that the amnesiac be beaten on the head makes for the film's funniest scene. "WHY NOT?!?" he exclaims, in English, with unfeigned glee. If only Salman could work up as much interest in the roles he plays in this decade!

Karisma wears some of the most hideous outfits you'll ever see on anyone, which is saying a LOT for a 1994 Bollywood film. (The pictured ensemble--pants that appear from the front to be fringed white Daisy Dukes with suspenders but from the back look like leggings--ought to serve as a cautionary tale to adventurous young designers everywhere.)

In due time the boys' identity is more or less revealed, not that anyone cares. The couples pair off, and the girls explain that Karisma is Raveena and vice versa, which is problematic for a couple of minutes and then falls by the wayside to make room for bigger identity issues. Raveena/Karisma's rich industrialist daddy (Paresh Rawal) has an evil twin who decides to kill the daughter to get back at his brother, or something. The servants in the Raveena/Karisma house, Bhalla and Robert, are secretly in the villain's employ and try to do the poor heiress in using a bomb, a poisoned drink, and Vasco da Gama's gun. All of this works exactly as well as it does when Elmer Fudd tries to kill Bugs Bunny. Let it wash over you in the Warner Brothers spirit and/or have a few drinks while viewing, and you'll find yourself giggling like an idiot.

Two simultaneous kidnapping plots, a diamond heist, and dacoity from a villain who calls himself "Crime Master Gogo" occupy much of the second act, which brings all the characters--including both Paresh Rawals--together for a final showdown. And since it's a godown showdown**, the room is filled with barrels and henchmen. One Paresh Rawal's cheek is marked with an X. But is he the good Paresh Rawal or the bad one?

The good guys (using the term loosely) and the cartoon villains take turns having the upper hand. At one point Gogo and Prem have what appears to be a pelvic-thrust-off:

There's no physical contact, but the sheer force of their masculinity knocks them over anyway. Fortunately, nobody gets hurt.

It will come as no surprise that all is well in the end. Everything turns out so well, in fact, that Paresh Rawal (the good one) apparently forgets that Karisma (or is it Raveena?) is merely his daughter's secretary instead of his actual daughter, and everyone acts as if both Amar and Prem are about to become lucky rich husbands of two women who now are apparently both heiresses. What a relief for Amar, who was resigned to marrying the penniless one!

And speaking of families--astonishingly, we never return to the badly dissed fathers of the opening sequences, last seen being put out of their houses. Paresh Rawal is apparently daddy enough for everyone! Pretty soon, he will get to play three father-figures in Oye Lucky! Lucky Oye!, so I guess this is good practice. 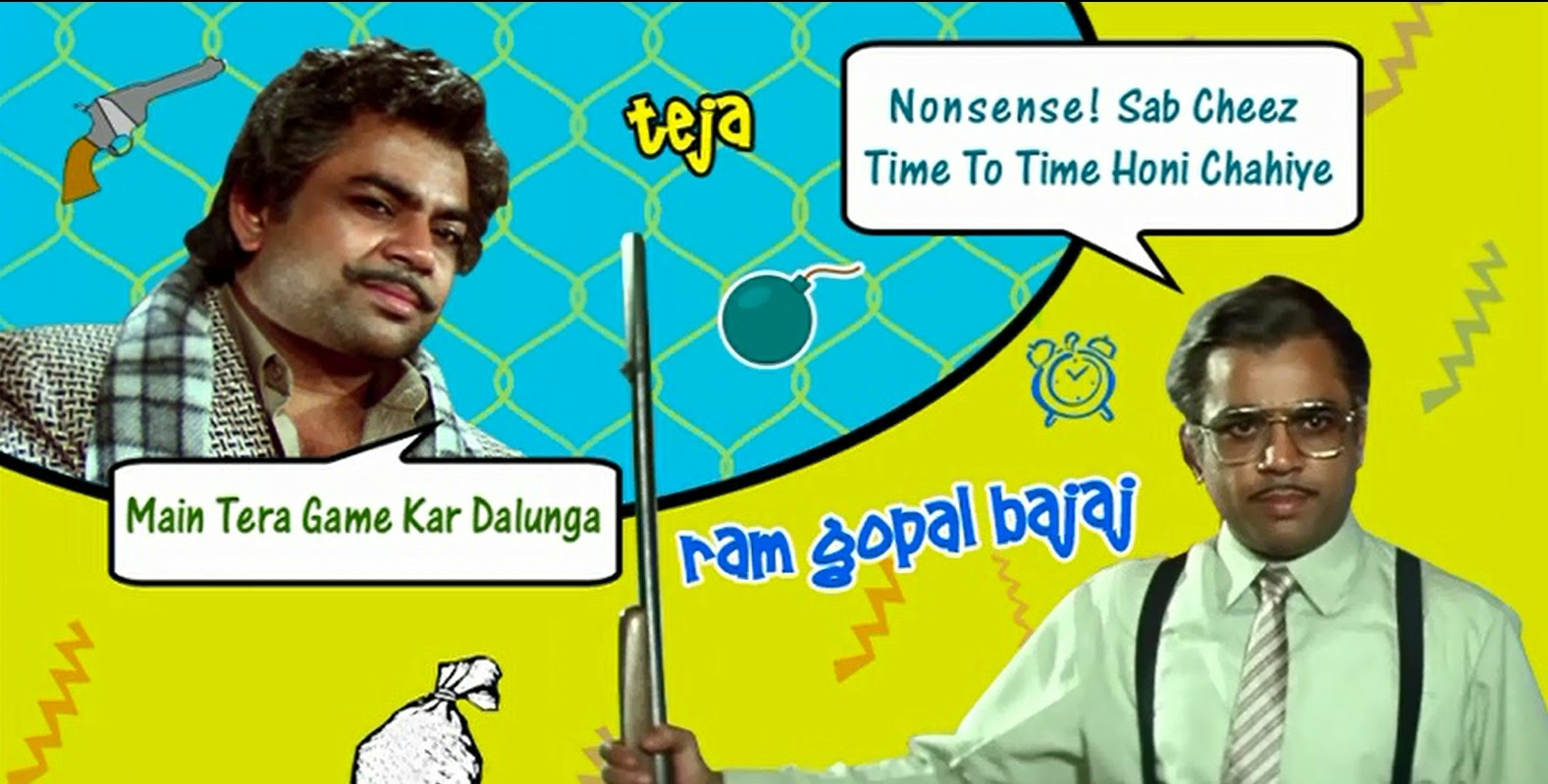 Aai la! Oooee ma! Elmer Fudd and Bhalla! A good time is had by all, even by the bad guys whose bombs and guns always backfire. Live-action cartoons can be pretty hilarious.

*who is AWESOME!! Thank you, Supraja!!

**I have always wanted to say that.