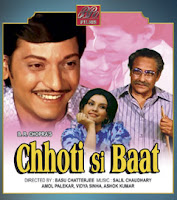 I’m always moaning about Hindi films that rip off Hollywood without successfully transferring the story to an Indian milieu. Well, here’s Chhoti Si Baat, a film that I didn’t even know was a remake of a 1960 British film (School for Scoundrels) because it has been transplanted so successfully to Bombay, circa 1975, and because Amol Palekar is so irresistibly adorable in the role of milquetoast Arun.

This charming main character is a hopeless, hapless office-going underdog so mild as to be nearly invisible. Nobody pays the slightest attention to him at work; by some miracle he has underlings, but they spend their days lounging communally around a transistor radio, blowing off Arun’s requests for reports and files blah blah blah and making him look bad with his own boss. He falls for a pretty girl, Prabha (Vidya Sinha), who works in another office, but he lacks the nerve to speak to her or even to get on the bus after her when the conductor tells him it’s full (which it doesn’t seem to be—maybe things were different in what the IMDb summary calls “pre-hypercongestion Bombay”). But he adores her, so he follows her around just to be near her and her gauzy polka-dot sarees.

The film lets us in on a little secret: Arun may feel invisible, but Prabha has indeed noticed him, and she’s as amused and charmed by him as we are. As she gives a girlfriend at work daily updates on Arun, it’s clear that she is as aware of his every move as he is of hers. However, the proprieties must be observed. So she goes on living her life and waits for him to declare himself.

It takes a while, but that’s not to say that nothing happens. Arun is Mitty-ish as well as Milquetoastian, so we get to see events play and replay in his imagination. It's fun to try to guess what's real and what's only Arun's dream--or nightmare. Here’s one of the film's insanely fabulous bits for those who adore self-referential Bollywood (me! me!)--the song “Jaaneman Jaaneman,” which  purports to be a part of a film Arun is watching in a crowded movie theater:


Dharmendra plays the boy, wooing Hema Malini the girl, and Arun smiles happily at this natural onscreen pairing. But then in his imagination, Hema is replaced with Arun’s own dreamy girl—in the arms of the studly Dharmendra. See Arun squirm! But a moment later Arun has willed himself into the scene, having replaced Dharmendra, and audience-member Arun can relax again.

Outside the movie theater, Arun is equally plagued with jealousy. Prabha’s coworker, a smoothie with a scooter (Asrani, whom I will always think of as the jailer from Sholay), starts offering Prabha lifts to work, taking away Arun’s best chance to talk to her without looking like a creepy stalker. This interference provokes Arun finally to muster the courage to ask Prabha to lunch, and she accepts—but Asrani is there in the restaurant and invites himself to join them, ordering like a big shot before whisking Prabha back to the office and sticking Arun with the check.

After a few more misguided attempts to impress Prabha, each of which fails more spectactularly than the last, Arun seeks guidance from fortune tellers and bogus sadhus before heading to Khandala to find Col. Julius Nagendranath Wilfred Singh (Ashok Kumar), India’s biggest fixer. Why, he’s so famous that Amitabh Bachchan himself, in a squee-inducing cameo, pops in to ask for advice, confers with the colonel, touches his feet, and dashes out. (Is this an Arun fantasy, too?)

Arun naturally follows the Colonel’s advice--come on, wouldn’t you? In short order Arun turns himself into the kind of modern swell who can eat Chinese food with chopsticks, psych out his opponent in table tennis, and trounce Asrani at his own game. Prabha is his!! But has Arun, in the process of becoming a man who can play Dharmendra, lost himself? Will he remain worthy of the “character certificate"  he has offered to show the girl he loves? Will he turn Prabha into the kind of girl who wouldn't be caught dead in a dotty saree?

By raising such questions, it’s clear that the film wants Prabha and Arun to end up together on very old-fashioned terms. It’s not enough for Arun to reveal that he loves Prabha and show some backbone. He has to prove that he is able to become that obnoxious westernized striver so that he can firmly reject that path and succeed in remaining a sweet and decent boy, albeit one who finally knows how to command a little respect from a bored office peon.

So Arun drops his invisibility--giving everyone else the chance to see the basic decency that Prabha has identified all along. And Asrani? He traipses off to Khandala to meet Col. Julius Nagendranath Wilfrid Singh and see if he, too, can find his way back from westernized striving to the sweet and decent path, which is after all where one finds girls like Prabha.... 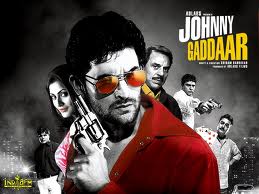 I love self-referential Bollywood movies that allow me to pretend I’m a real insider (instead of wildly ignorant in comparison with even casual filmgoers who’ve grown up in India, which is what I am). How many Yash Raj films jokily quoting Dilwale Dulhania Le Jayenge did there have to be before I decided that one more was too many? A lot, that’s how many.

And what would be an improvement on lame DDLJ jokes? How about a nice little gangster noir with a smart script that really integrates the Bollywood tributes into the story? How about heroes of yesteryear and tomorrow and some terrific character actors? DONE. Sriram Raghavan’s Johnny Gaddaar hurtles headlong from Bimal Roy to Krishna DK and Raj Nidimoru, with stops to visit Vijay Anand and circa-1971 Amitabh on the way. If there isn’t already a version of the Kevin Bacon game featuring Dharmendra, maybe it’s time to start one.

Writer/director Sriram Raghavan shows a ton of panache and sass that works really well here to give an adrenaline boost and some humor to what is essentially a very dark story. After a dedication to filmmaker Anand and writer James Hadley Chase--my fellow American, but I don’t know his work at all--the film begins at the end, with a black-and-white scene of a busload of snickering cops followed by a shooting. (This isn't to say that we know what happens or to whom, quite.) Then we’re swept into a super-pulpy credit sequence with cheesy video effects that recall this 1970s favorite, the original Don:

A shot of a car tipping, Psycho-like, into a quarry pond yields to snapshot introductions of each member of the gang. There’s Seshadri (Dharmendra), the elder statesmen of this band of goons, whose sentimental attachment to his late wife involves listening repeatedly to a tape of her singing “Mora Gora Ang Laile”  from Bimal Roy’s lovely Bandini--a film that starred the young Dharmendra as a handsome doctor who loves Nutan (playing a woman who has committed a murder in a moment of surrealist madness) but fails to rescue her from her fatal commitment to her tubercular lover.

There’s Shardul (Zakir Hussain), a hotheaded thug of no fixed moral code—here he’s smarter and more middle-class, but no less terrifying, than the extortionist he played so memorably in Shor in the City. There’s a quiet giant named Shiva who secretly loves the nurse caring for his senile mother (a badly cast actress with horrid old-age makeup is one of the film’s few wrong notes). There’s Prakash (the delightful Vinay Pathak), the owner of a gambling den who is far too fond of the vice he oversees.

And there’s Vikram (Neil Nitin Mukesh, in an assured debut). This handsome young man seems to his co-conspirators to be a nice Indian boy—he is polite and respectful to the elder gangsters in ways that are familiar from more traditional good-son roles. But Vikram isn’t a boy who has been forced by circumstance or momentary weakness into a life of crime. He has a love of flash and a married girlfriend—married, in fact, to the scary Shardul.

Vikram is sympathetic up to a point, if only because he’s polite and handsome and fond of his cat. (Can you think of another Indian film where a main character has a pet cat that isn’t just supposed to be creepy? I can’t.) But he doesn’t seem to have absorbed the moral lessons of the old Bollywood movies that his life has been steeping in—and he is too in love with himself to recognize that borrowing the name Johnny from Vijay Anand’s Johny Mera Naam (which happens to be playing on television when Vikram needs a fast nom de guerre) doesn’t mean that the bad deeds can be cast off as easily as Dev Anand’s disguises. This kind of selfishness can get a boy in trouble.

Johnny Gaddaar isn’t a whodunit, as we know very early on that Vikram is plotting to steal the other gang members’ share of a big score (instead of being satisfied with his 20% of the free money) so he can abscond to Canada with the girl. His plan is lifted wholesale from Amitabh’s 1971 Parwana, a film we see several characters watching on television. The suspense happens as one thing after another goes badly wrong with the plan, and as Vikram learns that others are onto him. First the young lover kills reluctantly to keep from being found out. But soon he’s slaughtering people in desperation, knowing (as we do) that each murder makes a bad ending for our—what, hero?—a little more likely.

In the end Vikram doesn’t seem significantly less evil than Shardul or the corrupt Inspector Kanyal (Govind Namdeo, whose ability to convey terrible thoughts with one sleepy glance must make him awfully hard to live with). Honor among thieves? No, the other gangsters have all been dispatched—so much for "Yeh Dosti." The least folly-driven and perhaps most moral character does surprise us by seeking vengeance; the cops in the bus turn around and head over to collect the body.

Even this small restoration of order doesn’t restore much—everyone is either dead or about to be packed off to jail, and while we know that the right man has died, we also know that the killer may think otherwise. As the great Nigel Tufnel so memorably said, “It's like, how much more black could this be? And the answer is none. None more black.”

Pump the music up a little louder, though, and move your body. Hey, you can dump it into a quarry, or maybe for now you can just stow it behind a couch.