India’s 2012 nominee for the foreign-language Oscars is Barfi, a sweet film starring the charisma-oozing Ranbir Kapoor as a deaf Darjeeling boy. If Ranbir weren’t already a great big movie star, this performance would make him one—he’s graceful and charming, selling comedy and schmaltz with equal panache. Like every Hindi-film fan, I could list star kids at whom producers should stop throwing money, but in Ranbir’s case I’d argue that the genetic slot machine handed him a jackpot (which isn’t to say that he doesn’t put any effort into his roles—only that his effort is usually invisible from the audience’s perspective).

After seeing Barfi at a New York theater recently, I was surprised to learn that the buzz among Indian Oscar-watchers was all about the film’s supposed lack of originality. OK, I thought—maybe the nominating committee picked Barfi in a cynical attempt to piggyback off the success of The Artist, another film with a nearly silent leading man and a lot of nods to plot points and visuals from the pre-talkie era. Remember this?


(In which case, I hereby predict, it was a bad move; there’s no point whatsoever in second-guessing this year’s Oscar winners based on last year’s. But I digress.)

As it turns out, no, The Artist isn't the problem. Instead, as a quick click on some Wikipedia links reveals, Barfi is being charged with stealing ideas from a host of other films, from Charlie Chaplin and Buster Keaton silents to South Indian and Korean films of recent vintage. And the Internets are abuzz with concerns from Indians and NRIs that this kind of “cutting and pasting” (or theft, as the less polite would have it) will make Indian film a laughingstock in the international film world.

Now, Indian cinema has had a history of “unacknowledged remakes” in which hits from other cultures (often Hollywood) are recreated—character for character, plot for plot, sometimes word for word—without any “based on a story by” or writer credit to the original film. (Here, for example, is an unacknowledged remake, starring Oscar producer Aamir Khan, of this Cary Grant and Deborah Kerr starrer, and by the way, I loved both films.) And perhaps that history is what’s driving the almost unhinged anxiety among so many in the Indian media about whether Barfi is “original” or not.

But I have seen no evidence at all that Barfi has borrowed or repurposed material from other films on a scale bigger than what is typical in American cinema. Yes, Ranbir recreates Donald O’Connor’s dummy schtick from Singin’ in the Rain’s “Make ‘Em Laugh” number nearly move for move.


But what is he trying to do? Well, the autistic girl he loves, Jhilmil (a very un-glam Priyanka Chopra), is upset, so duh, he’s trying to make her laugh. I don’t know how popular Singin’ in the Rain is in India, but American audiences know it so well that I assumed the reference was purposeful, and it worked beautifully for me.

And I also assumed that Indian audiences would enjoy, as I did, the sight of Ranbir channeling the great Raj Kapoor, whose beloved tramp character was “Chaplinesque” but firmly situated in Indian stories and films. Wearing a pencil moustache through much of the film, Ranbir looks remarkably like a fit, younger version of his grandpa. (Were filmgoers in the 1950s jumping on Raj for borrowing too heavily from Chaplin? If they were, Raj’s legacy is having the last laugh.)

Yes, Barfi includes moves you’ll recognize from Buster Keaton and Charlie Chaplin, with chases that involve teetering ladders and runaway handcarts. The interaction between Barfi, turning to robbery in desperation to pay for his father’s operation, and his fat-cop nemesis (Saurabh Shukla, one of those undersung second fiddles whose solid performances anchor so many Hindi films) is reminiscent of Laurel and Hardy, or the Keystone Kops—practically any silent featuring an underdog accidentally provoking a foul-tempered authority figure, which is, let’s face it, a lot of movies.

There’s also talk of a sequence supposedly stolen from the Korean film Lovers’ Concerto (of which I’ve never heard, but who knows, maybe it did blockbuster business in India). A boy who has come on strong to a pair of girls in a restaurant realizes that he shouldn’t have and tries to “turn back time” and start the friendship anew. In the Korean film, the boy shows up outside the restaurant holding a clock. Barfi scales a clock tower precariously and swings the hand back. If you ask me, director Anurag Basu was inspired less by Korea than by Harold Lloyd’s iconic scene from Safety Last, but hey, I guess I’m not really that much of a stickler for originality. Whatever that means.

I really do wish that Indians wouldn’t get vocally outraged about the kind of "plagiarism" that is really a non-issue, if only because it reduces the chances of commercial Indian films being taken seriously abroad. (And yes, there are commercial Indian films that deserve to be taken seriously.) But sadly, I agree that Barfi—which is a very good and hugely enjoyable film—doesn’t stand much of a chance of getting into the foreign-film Oscar Top 5. Why? Well, in the U.S.A., “barf” (rhymes with “scarf”) means “vomit.” And that, not the silent-film references, is what Americans will find hard to swallow. 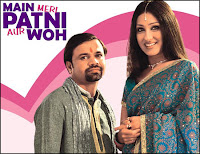 The title of Chandan Arora's Main, Meri Patni, aur Woh ("Me, My Wife, and Him") reveals that the film's focus is supposedly a marriage, but by far the most interesting part of the movie happens before the couple wed.

As the film opens, Mithilesh Shukla (Rajpal Yadav) is responsible, studious, and single. He manages the library at Lucknow University,  oversees his mother’s household and the marriages of his younger siblings, and feels he has plenty on his plate without a wife. He seems to be a relatively modern guy by Hindi movie-hero standards. (Admittedly, this isn’t saying all that much.)

A prospective bride in a nearby town comes to the family’s attention, so Mithilesh is pressured into accompanying his uncle to the girl’s house. Hardly a girl—she’s thirty, not all that much younger than our librarian hero. He plans to ditch the visit and return by the next bus, but as the uncle points out, why not meet her? She’s probably going to reject Mithilesh anyway for being so short. Ouch.

A nice setup, and the meeting of the very tall, very lovely ancient spinster and the librarian is well played. Nobody will be surprised that our hero begins to reconsider his principled opposition to marriage after meeting Veena (Rituparna Sengupta), who has not only looks but education and shares his literary interests. And though obviously he’ll end up marrying her, it is a surprise—to Veena, too—when his first offer is simply to write to her and be her friend.


Playing the friendship card wins her heart, even as she reveals that she has, in fact, rejected two (presumably height-advantaged) suitors. How modern both our hero and heroine are. And so the couple are wed. As usual, the arranged-marriage plot gives this apparently mismatched pair a solid reason to try to work things out.

Sadly, the screenplay would have you believe that the little seed of doubt planted in Mithilesh’s mind by Uncle back on the prenup visit quickly grows into a kudzu-like* maze of insecurity that has Mithilesh plotting with increasing ridiculousness to keep all men away from the missus. First he’s jealous of his best friend, a buffoon of a soccer coach. Mithilesh dispatches this first “rival” by lying to both friend and wife about the other’s supposed wish for a sibling, resulting in a rakhee ceremony that puts Mithilesh’s mind at ease. (Perhaps he hasn’t seen Bombay Talkie? But hey, at least in that movie the spouse pained by jealousy has something real to worry about.)

Next Mithilesh resents the milkman’s appearance at the apartment door and cancels the milk delivery. Then it’s the vegetable vendors—hmm, aren't those bitter melon purchases suspiciously haggle-free?? And then he pretends that his mother is lonely and needs her daughter-in-law to spend the days with her helping with housework. On and on and on it goes.

Now, insane jealousy that is both unwarranted and hilarious is not unknown in films. Here’s Rex Harrison in Preston Sturges's Unfaithfully Yours coming unhinged over a bad user interface as he plots to kill his supposedly unfaithful wife:


But whether the problem in MMPAW is the pacing or the writing or the fact that we’re not in the 1950s anymore, here it just isn’t funny. Like, really not funny. And this movie can’t decide whether it’s trying to tug at our heartstrings or make us snicker—but director Arora distinctly seems to expect us to feel sympathy for the librarian and his pathetic insecurity as he works to wall his wife off from all contact with the non-mother-in-law universe.

The film gives no indication that Veena notices that something is amiss, or that she has any objection to being treated as untrustworthy. In fact, Veena's character is quickly made irrelevant to the story. Maybe that's supposed to be the film's way of showing that Mithilesh is entirely focused on his own obsession. But it has the side effect of turning Veena from a real and intriguing character into an invisible woman about whom it's hard to care--which suggests that perhaps Mithilesh doesn't feel much of anything about her, either, other than his pride in having snagged a beauty.

At last, after all the ridiculous non-rivals have made Mithilesh thoroughly paranoid, a plausible actual rival appears in Lucknow. He’s Aakash (Kay Kay Menon), the bride’s childhood friend, who is in town to install Lucknow University's new computer system. He’s smart and thoughtful, he’s known her forever, he’s way taller than Mithilesh, and he’s always around, making Veena laugh and conversing with her as if she were an actual human with interests and intelligence. Oh, and he’s handsome (being Kay Kay) and funny and can even sell a sad song:


Around this point Mithilesh convinces himself of the completely insane notion that Veena wants a divorce so she can marry Kay Kay and that Uncle is actually abetting this plot. (What? Why on earth would he do that? Oh, never mind.)

He decides to be gallant about the whole thing and give Veena up gracefully. This section is a little heartbreaking—not because Mithilesh is sorrowful, but because we've seen no indication that Veena wishes to be given up. Rather, she is delighted at the return of that nice man she agreed to marry as Mithilesh focuses his attention on her for the first time since the wedding. He cooks for her. He asks her to meet him at a  swanky romantic restaurant.

And there, as she eats her soup, Mithilesh tells Veena that he knows her secret and that he’s fine with a divorce. Her actual secret is that she’s pregnant with twins, so she leaves, furious and embarrassed, and goes straight back to her parents. He realizes he’s been a jerk and a dope (duh). They suffer apart briefly and then reconcile, whew, to live what the film wants us to believe will be a perfect, happy life now that Mithilesh has overcome his unreasonable jealousy.

The omniscient narrator (Naseeruddin Shah) deus-ex-machinates that Aakash will get married and move to Bangalore—dispatching Mithilesh's most feared rival in a too-neat solution that won't sort out underlying issues any better than the faux-rakhee ceremony. Honestly, would it have been too much to suggest that our hero actually needs to figure out how to trust his wife?


*Must google kudzu. Does it grow from seeds?