SAAGAR: An Ocean of Cheese

A couple of years ago, while putting together a retrospective to show Americans the glories of Hindi film, Mike Enright and I tried to come up with a great film from every decade of the first century of Indian movies.

It was going fine until we hit the 1980s and stalled. Yes, of course, we've enjoyed some 1980s films--but generally we have enjoyed them ironically. Could we in good conscience recommend any of them to someone else? So many films of the decade seem to feature predictable plots, cardboard characters, and over-the-top acting, all smothered in cheese.

All of these generalizations are more or less true of 1985's Saagar ("Ocean"), which marked the return of Dimple Kapadia to filmidom after her 12-year marriage to superstar Rajesh Khanna foundered. (She was all of 28 when she made this film, having gotten married right after she made a splash as the bikini-teen heroine of Raj Kapoor's Bobby.)

Saagar was India's submission for that year's foreign-film Oscar, a category in which Indian films have traditionally not done very well. Oscar likes India's films about villagers who suffer nobly (Mother India, Lagaan) but so far not much else.

Inevitably, Saagar didn't make the final Oscar cut. You can imagine the nominating committee's members watching with a condescending smile and saying to each other, "This was the greatest film from India this year?" And indeed, Saagar encapsulates much of what strikes sophisticated viewers as embarrassing about Bollywood: greeting-card sunsets as the backdrop for pining lovers, sneering villains doing evil just because, star-crossed romantics chewing the scenery with big soulful eyes. This film's claim to lasting fame, apparently, is its titillating slow-mo shots of Dimple swimming (and dropping her towel afterward--this viewer saw nothing R-rated in a rental DVD, but maybe I blinked at the wrong moment, since plenty of Googlers have more fevered memories of the scene).

Yet I do think Saagar has something going for it, not least because of the fact that it's directed by Ramesh Sippy of Sholay fame. I think we can all agree that the man knows how to put together a masala entertainer. Subtlety, schmubtlety! When Ramesh Sippy's in charge, the film plays to the balcony, and the audience gets to go along for the ride.

As the title suggests, the story begins at sea, with good-hearted orphan Raja (Kamal Hassan), a poor but happy fisherman. He enjoys playing practical jokes, usually trying to convince his childhood friend Mona (Dimple) that he's been fatally injured. She's the high-spirited and poor but responsible daughter of a bar owner (Saeed Jaffrey). We're in Goa and she's Christian, which, as I understand it, makes the whole bar thing not only perfectly fine but pretty much a tradition.

Along comes another good-hearted orphan, Ravi (Rishi Kapoor), the rich grandson of a sour-faced businesswoman (Madhur Jaffrey). He has returned from abroad, where he's presumably been shopping for leisure wear, to learn the family business. He has fond memories of his deceased parents, but Granny's face gets even sourer whenever she remembers that non-rich girl her son ran off and married.

These three good-hearted young people of course form a triangle. Rishi loves Dimple and sees Kamal as a brother; Dimple loves Rishi and sees Kamal as a brother; and poor bro-zoned Kamal loves Dimple and sees Rishi as a brother. True Love™ between Rishi and Dimple (un-spoiler, because Bobby) crashes into True Friendship™, allowing the boys to compete to see who can be more self-sacrificing while entirely ignoring what the girl's heart wants (un-spoiler, because Bollywood in the 1980s).

The girl, though good at heart and a helpful daughter, unwittingly reveals sexy sexiness at every turn (un-spoiler, because DIMPLE).
Granny's haveli festers with scheming, villainy, greed, and self-confessed sycophants.

The fishing village seems pleasant enough, but scratch the surface and the place seethes with resentment. The girl's father is beaten by goons in Rishi's granny's employ. The villagers rage at Rishi for this, but they rage even more at Dimple for daring to cross class lines--and apparently for being so damnably sexy, a crime of which young women all over the world are still being accused all these decades later.

Well, you don't have to be a Bollywood Genius to be several steps ahead of the screenplay on this one. The love triangle alone guarantees that people will be wailing NAHIIIIIIIIN! near the end.

I'm making Saagar sound terribly silly--and it is indeed a very silly film. Do I believe in my heart of hearts that the Oscar voters overlooked a classic, blinded by their own anti-Bollywood snobbishness? No, I don't. But...somehow...in spite of its flaws and its undeniable cheese factor, there is real emotion in this movie, and it is a whizbang entertainer.

Obviously, Sippy knows his whizbang entertainment and isn't afraid of emotion. Who didn't weep when Jai died in Veeru's arms? Saagar, like Sholay, flaunts its commitment to male bonding and masala, and too much of either one is perfectly OK with me.

It's true that Sippy has less to work with here--no speeding-train dacoity, no Gabbar Singh, no slaughtered innocents. He also has no Amitabh and Dharmendra; nevertheless, the leads in Saagar are still in (over-
the-) top form. Rishi and Dimple have undeniable chemistry, as they did in Bobby. For that matter, so do Rishi and Kamal.

All three stars embrace the cliches they've been asked to enact, convincingly gung-ho in their effort to Do the Right Thing--Bollywood pan-Indian version--and improve a situation in which someone has to end up unhappy. Eyes brim and lips tremble. Yes, you may want to shake Rishi and say, "Why don't you ask HER which boy she loves?" Yes, you may want Dimple to flee a village where people blame her when her father is abused by evil rich people. Yes, you may wish Kamal would not be quite such a martyr. Yet no matter how clearly you can see the ridiculousness of the characters' plight, you can still get caught in Saagar's net. You may even end up wailing NAHIIIIIIIIIIN in the final moments yourself.

So should you see Saagar? Well, that depends. If you sneer at predictability, then stay away--you can be pretty certain that a movie in which Rishi Kapoor and Kamal Hassan compete for the love of Dimple is going to end badly for Kamal.


On the other hand, if you're irresistibly drawn to a raucous drunken dance-off, then by all means go for this one. And I'll be with right there with you. Oscar only likes noble villagers? Well, never mind. I'll watch Rishi in a leisure suit any time he's flinging himself wholeheartedly into the arms of the terpsichorean muse.* It doesn't have to mean anything more than WOOOOO WE ARE HAVING SO MUCH FUN. 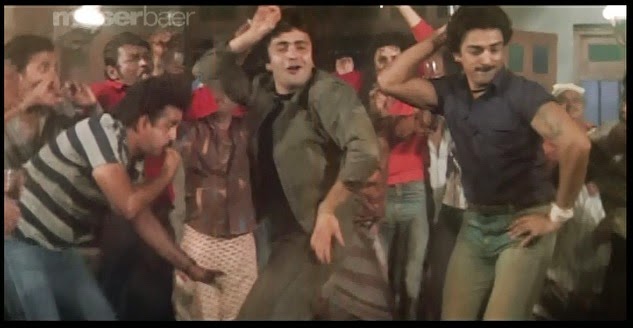 Who needs you anyway, Oscar? Don't let the door hit you on the way out.

*Accidental, but fitting, that this Monty Python reference comes from a sketch about cheese.

Posted by LengelCJ at 6:10 PM No comments: