DO AANKHEN BARAH HAATH: The Eyes Have It 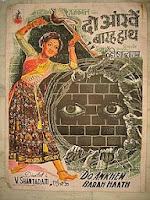 Do Aankhen Barah Haath* (Two Eyes, Twelve Hands), director V. Shantaram's sublimely weird and lovely 1957 drama, tells the story of an enlightened prison warden, the six convicted murderers whose lives he changes with an open-prison experiment, and an itinerant toy-seller who happens along. Shantaram spins his tale by relying heavily on song and image, as if to explain patiently to very simple people that every human is capable of being good. This antidote to cynicism is a joy to watch.

The story follows the warden's desire to try his hand at rehabilitation. He selects the six most despicable killers in the prison and explains that they will accompany him to a barren piece of land that they must turn into a productive farm. (Metaphor alert!) They will not be locked up; only their duty to the warden and to each other will keep them on the farm.

The prisoners, a burly, hairy, grunting lot who are so accustomed to being chained that they tie themselves up on their first night in the outside world, must be prompted repeatedly to reveal their own names. They add handprints to a sheet of paper for the warden when he asks them to identify themselves. They communicate more with actions and broad facial expressions than with words; at important moments, Shantaram superimposes silent flashbacks alongside their faces, as if their thoughts were home movies. Along with this simple, very literal mind-reading, the broad pantomimes of their daily routine make the killers seem both comical and childlike as they embark on new lives as hardworking farmers.

The film's sole female character, the sassy toy-seller Champa (Sandhya, who is fantastic), also possesses an amazingly expressive face; she's got mad dancing skills, too. Best of all, Champa's hip-swaying walk is accentuated by a little machine that she ties to her clothes to follow her with a constant drum roll. It's probably a good thing that this landscape is sparsely populated; imagine if everyone made this much noise just passing by! But both the drumbeat heralding Champa's arrival and her grumpy traveling song are irresistible.

As the warden who stakes his reputation on the prisoners' willingness to follow the rules outside the prison walls, V. Shantaram himself--in his fifties (!!), but looking twenty years younger--also makes great use of silence and of his expressively filmi face. He's a father figure whose role is to model for the convicts the way they ought to live and behave. He works alongside them, cooks for them (much to everyone's chagrin), helps them readjust to life outside the prison, and fights for their dignity.

The eyes of the title belong to the warden, and his face is often framed or lit so that eyes are all we see. At key points in the film, his eyes appear in the sky when he isn't present. This sounds creepy, I know, but it's not--the warden is such a benevolent force that his omniscience ultimately inspires even hardened killers to try not to disappoint him. He's fair and just, and he understands their unhappiness without always being able to make it go away. Shantaram is likeable and believable playing a man who could easily be too good to be true.

Do Aankhen Barah Haath makes virtuoso use of faces and skies, light and shadow. The moment when the prisoners are silhouetted against the blinding daylight of the open prison door is hopeful, but it also conveys how sudden and strange this new situation is for the convicts. (There's even a chorus of bird song that grows deafening as they emerge into the world.) Out on the broad plains, the tree at the farm's gate at sundown has a Gone with the Wind glow--but minus the slavery.

All of the glorious visuals and charming storytelling would be enough even if the music were nothing special. How extra-fabulous, then, that every number from music director Vasant Desai is a gem. And what a range of emotions the songs cover, ranging from Champa's motivational "Tak Tak Dhum Dhum" and a number joyously heralding the arrival of the rain** to the lovely lullaby "Main Gaoon Tu Chhup Ho Ja," complete with sleepy calf and chicks.


The real kicker, though, is the hymn that reappears throughout the film, "Ae Malik Tere Bande Hum" ("Master, we are your children"). The film uses this song repeatedly as it works through many manifestations of the watchful parent/wayward child idea. At first the hymn is a prayer; the second time we hear it, the warden--waiting anxiously for the convicts to return from their first trip to the market without him, with night falling fast--is the picture of a worried father.

He's right to worry. The market official is the villain of the film, a greedy cheat who pays locals a pittance for their crops and resents the arrival of six hulking vegetable-growers who refuse to use a middleman. He tries various tactics to appeal to the convicts' baser natures.

The final test of the convicts' will to do the right thing comes when they are falsely accused of attacking the bazaar manager and beaten nearly to death in the marketplace. They could fight back--they're certainly big enough--but they don't, because they know that fighting will destroy the warden's reputation. Instead, they simply stand and accept a rain of blows until they fall unconscious. The scene  reveals just how much strength is required for these former thugs not to fight, and their conversion from broad comic characters to heroic strugglers is tremendously moving.

Also moving is the revelation that the warden's presence isn't the only thing keeping his little family on the straight and narrow path. The final reprise of "Ae Malik," sung by Champa, finds the convicts no longer either childlike or comical. The master being addressed in the song this time might still be a paternal god, or a prison warden, or a dad--but it might also be the watchful eyes of conscience. It's clear at this point that everyone in the film has internalized the warden's idealistic vision, and it's pretty damned beautiful.

V. Shantaram's satisfying fable is a useful reminder to us all that whatever we've done in the past, we can still decide to be decent human beings going forward. And thanks to Vasant Desai, we can sing as we go! Tak tak dhoom dhoom, tak tak dhoom dhoom....

*Major gratitude to Beth for introducing me to this fabulous film! May her DABH poster bring her many years of enjoyment.

**Surely this song must have inspired the "Ghanana Ghanana" number in Lagaan.

Posted by LengelCJ at 3:47 PM No comments: