RAAZ 3: All About Arth

Every now and then a film comes along that is so stupid that it's compulsively watchable. Being entertained by Raaz 3  was a little unsettling: who knew it would be possible to enjoy a film called [Anything] 3? But enjoyable it is, if only on a Showgirls level. Bipasha Basu throws herself with gusto into the role of an actress willing to go beyond mere negative roles to find success.

Let me first note that I haven't seen the other two installments in the Raaz series. According to Wikipedia, the omission is of no consequence, for the Raaz films neither build on one another nor feature the same characters. The name "Raaz" is purely branding--letting the faithful know that the Bhatt dynasty has released another supernatural thriller. (Hey, it's a living, though it's a stunning departure from the days when Mahesh Bhatt--now patriarch and producer--created works of Arth.)

I also don't know whether "black magic" is really a thing in Hinduism. This, too, is unimportant. When I first saw The Exorcist, I was ignorant of whether the Catholic church really had an official policy for dealing with demon possession, and I remain so today. The point was to creep out the audience and to buff the head-spinning, pea-soup-puking content with a veneer of seriousness. To that end, any religious ritual--even an invented one--would serve. Same deal here; Raaz 3 has a demon of uncertain provenance and scenes set in Catholic graveyards "on the threshold between life and death," but apparently there's a puja for that.

As Raaz 3 begins,  Bipasha Basu is a famous actress over thirty who is nominated for a major award. She consults her astrologer, who tells her that the stars are aligned for her victory. But when another actress claims the prize, Bips is humiliated--she even stands up before the winner's name is announced and then has to sit back down, the way people do in movies when you need to see them extra-embarrassed. (An aside: do awards shows actually exist that have the winner in one category accept his prize and then remain onstage to announce the winner in the next category? The Oscars should try this; at least then maybe Martin Landau would get to finish his speech.)

For a while Raaz 3 plays out like All About Eve, if Margo Channing were seeking demonic assistance and if Eve really were as innocent and blameless as everyone thinks she is. The younger actress (Esha Gupta) gets the acclaim and the parts Bips wants. She seems to be ascending as Bips falls.

A former servant tells Bips that her god wanted her to win the award, but that another, more powerful god was backing the other actress. Without a backward glance at poor Ganesh on her home altar, Bips waltzes off to a bad neighborhood to meet with a demon who agrees to throw Esha Gupta under the bus.

Poor Bips doesn't get much help from the demon; he provides her with a potion she has to put in the younger woman's drinking water, but getting access to her is Bips' own affair. So, speaking of affairs, Bips seeks help from the director (Emraan Hashmi) of her new film, with whom she has a past. He cares about her--so much that he idiotically offers to give her his own award statuette to make up for her not winning one, whereupon Bips quite sensibly breaks a window with it. Emraan Hashmi is shocked that Bips is considering poisoning Esha Gupta's drink, but he has no trouble believing that demons are cooking up potions for her, which tells us a lot about his critical thinking skills. (Well, we are talking about Emraan Hashmi.) Naturally, Bips wins his cooperation with her mad sexiness. The price of sleeping with Bips is poisoning Esha Gupta, and at the time Emraan Hashmi thinks it's worth it.

You won't be surprised to learn that later in the film, after some Exorcist-esque  shenanigans, "serial kisser" Emraan Hashmi switches his loyalty to the younger woman and sleeps with her, too. But she's still presented as untainted, while Bips becomes more and more monstrous--presumably because Bips had the audacity to be the seducer in spite of, you know, not being a man, and because Esha is (in contrast) just a pretty girl who is completely helpless in the face of Emraan Hashmi's he-man vibe*.

Compare Bipasha Basu and Emraan Hashmi kissing, in this shot

with Emraan and Esha Gupta kissing, in this shot: 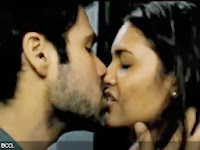 Bips is so in charge of poor Emraan in that first shot that it's almost as if he learned something from her in the second one. Emraan isn't my cup of tea, but I enjoyed watching Bips wrangle him so efficiently.

After falling for Bips' nemesis, Emraan Hashmi still can't stop Bips from continuing her poisoning ways. This leads to Esha Gupta having the kind of breakdown that would only be a disaster in Bollywood: attacked by swarms of Exorcist II locusts, she rips off all her clothes and runs naked into a well-heeled Hindi film crowd. This is a problem--get this--because the filmi media print that it's a publicity stunt rather than a genuine disorder. (Really? Claiming it was all a publicity stunt gets you out of trouble in Hollywood; it's the mental issues that cause worry.) Thanks to the impromptu nude scene, Esha gets bumped from Emraan Hashmi's film and lurks weepily about, hoping people will believe she's sincerely disturbed and not just a nudist.

Then things get awesomely weird. Thanks to Esha's firing, Bips gets her career back, and the item number in her new film has her dancing in front of guys wearing silver lame pants and fringed eyewear that is proof that it's better to look good than to see well:

And then this shot, which was, for me, the turning point at which I began to root for Bips to fall for the demon and get to keep making creepy sci-fi song sequences forever:

Who are those people in the tanks? (The ones who aren't Bips, I mean.) How did we get from the fringed-eyewear boys to sensory deprivation? If you're like me, seeing this clip would make you would put the movie-within-the-movie into your Netflix queue, stat.

Soon Bips meets with her demon again and asks him to kill off Esha Gupta for good and all, and only then does he demand payment, which is that she has to have sex with him. Bips doesn't look thrilled or anything, but neither does she seem to think that this is too high a price to pay.

The rest of the film is kind of like a horror-movie version of Arth, with Bips' seething cray-cray driving Emraan Hashmi back into the arms of sweet, only-crazy-on-the-outside Esha Gupta. Emraan Hashmi regrets having helped Bips. He reveals to Esha Gupta that he made a mistake in putting poison in her drinks, and she breaks up with him.

But when he comes crawling back, she's in a coma and so can't shut the door firmly in his face the way Shabana Azmi would have. There's a morgue scene (said to be another place "on the threshold between life and death") with a Hindu pandit and Emraan Hashmi and a doctor who exposits a lot of deeply unconvincing X-Files-style nonsense about things we know not of, blah blah blah.

Then Demon Bips comes calling and must be destroyed, but not before being slammed into walls and required to crawl over gurneys with a seriously messed-up leg. By this point I felt that demonic Bips was well worth rooting for--was, in fact, the heroine of the film. In All About Eve, audiences are pulling for cranky aging diva Bette Davis, not too-good-to-be-true Anne Baxter. In Arth, we certainly didn't want things to work out fine for the philandering husband. (I hope we wouldn't have cheered if he had tossed Smita Patil across a hospital room.) I understand that horror-movie audiences are accustomed to the "women who seek sex must die" rule, so Bips cannot survive to the closing credits.

But the last shot of Emraan Hashmi and Esha Gupta enjoying their happily ever after made me hope that the next Raaz might bring Bips back to rampage another day.


*Maybe she's just too traumatized to figure out what she's doing, since Emraan seduces her right after they've returned from their first attempt at exorcism in the graveyard, during which Esha ends up tethered to a decapitated demon-hunter. It doesn't seem like a typical date night, so it's also possible they are both kinkier than the script otherwise lets on.

Posted by LengelCJ at 1:00 PM No comments: