Well, I wasn’t sure it could be done, but I’ve seen the proof with my own sorry eyes. Another film released within a year of Joker was just as bad as Joker. Double Dhamaal features the cardboard cutouts of Sanjay Dutt and Arshad Warsi in a “sequel” to Dhamaal (which I haven’t seen, but please tell me it was better than this). In Lage Raho Munna Bhai, these two actors were both endearing and hilarious, and that was a sequel that far outdid its still-pretty-good original, Munna Bhai MBBS. But I’ll have a hard time getting my hopes up for their next outing.

Riteish Deshmukh and Jaaved Jafery should also be ashamed of themselves for cashing checks for their roles here, but let’s reserve our tightest slaps for the director, Indra Kumar (who also gave us the first Dhamaal) and especially for the alleged writer, Tushar Hirandani, who was responsible for Housefull 2 and so seems to be a go-to guy for terrible sequels.

I remember cringing at the stereotypical Chinese baddies in Chandni Chowk to China. Did Tushar Hirandani say, “Gee, that film was a bomb, but the Chinaman was so hilarious I’m going to put one in my movie too”? Maybe, because there’s Arshad Warsi sporting a cheap pigtail and speaking Charlie Chan English. Oh, and let's not forget the blackface on not one, but three characters, all wearing circa-1970s pimpwear. Apparently nobody involved in Double Dhamaal has ever watched this helpful video guide on how to tell if a costume is racist, but everyone should have:


In a piece in Sarnath Banerjee’s great new book, The Harappa Files*, a character argues that all martial arts developed from a South Indian original called kalaripayattu. “There are 12 levels of kalaripayattu,” the gentleman explains. “In the last level, you learn the use of urumi, the most dangerous non-ballistic weapon in the world. But by then you have reached a point where you have no desire to kill anybody. You have nothing left to prove.” When the conversation turns to films, someone asks, “Why are our films so bad, when other developing countries…are making such great films?” Here's a closeup portion of the final panel with the gentleman's response: 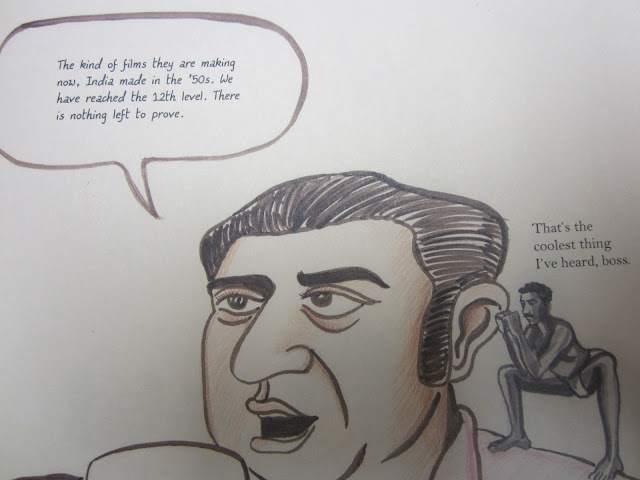 This answer, I think, is the only logical explanation for the existence  of Joker and Double Dhamaal. Some in Bollywood have attained Level-12 filmmaking, and the rest of us should be very, very afraid.

*Buy it immediately.
Posted by LengelCJ at 2:17 PM No comments:

JOKER: You've Got to Be Kidding Me


Now and then there’s a film that’s so universally dumped on that you pretty much expect to hate it—and then, maybe because the bar is set so low, you end up enjoying it a lot. I admit it; I liked Tashan—I finally got the appeal of Akshay Kumar, and I thought the faux-Bollywood song “Dil Dance Maare/Very Happy in My Heart” was both a funny parody and a good dance number.

But hoo boy, sometimes the universal dumping is there for a reason. I recently saw Joker, Shirish Kunder’s appalling mess of a movie. I thought at the time that it might just be the worst film I’ve ever seen—and definitely not in a let’s-get-wasted-and-see-a-midnight-show kind of way. There’s no earthly reason for anyone to see this film, much less for anyone to have gone to the trouble of making it.

We start this film with Akshay Kumar, a non-resident Indian, living in the United States, being a techno-whiz. (An NRI? Who understands science? You don’t say!) His attempt to build a radio to contact aliens has failed. Since he had a year to succeed and the year expires today (scientific results always being tied punctually to the calendar), he is being snarled at by his financial backer—a hologram of an evil white guy who wants RESULTS NOW—and his tech-dude-arch-nemesis, another evil white guy who speaks in the same hyper-enunciating, apparently overdubbed way that white guys always do in Indian films. (Even good ones. Do Indian directors request this kind of performance from white actors because that’s what Indian films always depict? Are the actors still being badly dubbed, or are they all really this bad? There are good American actors, I swear. I cannot explain why no American has ever given a solid performance in an Indian film.)

Next there’s a flashback to the Independence era, when Paglapur was left off the map because it was home to a huge asylum whose inmates had suddenly escaped, and the mapmaker fled rather than enter the town full of screaming loonies. I’m worried, a bit, that “screaming loonies” may sound politically incorrect—and believe me, as a New Yorker, I have seen more than my share of mental illness. (New Yorkers wear their own small neuroses with pride, and we require massive dysfunctionality before we write people off as crazy.) But these people really are cackling and leaping and burning things. It’s like Wall Street on the verge of the financial crisis.

Naturally these stories must be tied together, because the back of the envelope on which Shirish Kunder has jotted down his script says that they must. And so Akshay Kumar returns from present-day America to his hometown of Paglapur, also in the present day, where all the loonies continue to reside 65 years later—as if mental illness were as genetically determined as the ability to wiggle one’s ears.*

Like Shah Rukh Khan in Swades, the scientifically wise but emotionally shallow guy returns to the backward village, where he learns all over again how to get in touch with the simple pleasures of life. Like Jodie Foster in Contact, he’s desperate to come up with a message from beyond the stars before the money runs out. And like, oh, Donald Pleasance in the 1982 Alone in the Dark, he is able to communicate with dangerously bonkers inmates when nobody else around is safe from them. Of course, the inmates are Shreyas Talpade and Asrani, so they’re really just lovable goofballs, not killers. (Another difference is that Alone in the Dark is a lot of fun and filled with punk-rock moments, including bits of a live show from Tish and Snooky of the Sic F*cks. It has the courage of its convictions. See it instead.)

And no, I don’t think I’m changing my Barfi tune here. I don’t demand an entirely original, nobody’s-ever-done-this-before screenplay. I just want to watch a real movie, not a lazily patched-together pile of shiny bits that the director hopes will look from certain angles like a story.

Akshay spends a lot of very dull screen time working to fake an alien presence in Paglapur just to keep his evil white nemesis from making him look like the kind of scientist who would, you know, fake an alien presence. The ruse, too, is played for laughs, and as if pulling one over on the American scientist is some kind of moral victory for Akshay. I’m here to tell you that it is not. It is rather a big no-no for the international scientific community. Also for filmmaking, because it's not funny, either.

You know without my telling you that real aliens will appear and vindicate Akshay, but I’m sorry, this is not a vindication. It’s just an alien blessing pasted on top of the enormous fraud that is Joker. I almost rooted for the bad white actor.

*Which, in case you were wondering, I can do.

Posted by LengelCJ at 8:15 PM No comments: