George Kennedy won an Oscar for Cool Hand Luke in 1967, but I remember him better shilling for breath freshener in 1980s commercials where women gasp “George Kennedy!” in unison because they’re so thrilled with their celebrity sighting. In between these career high points, George apparently made a movie called Zig Zag, which I’ve never seen. I’m grateful to George for making it, though, because without that film we might not have the 1975 Hindi film Majboor, which according to Wikipedia is a “remake” of Zig Zag (without attribution, of course). Originality is certainly a fine thing, but even better are movies that serve up death sentences, prison breaks, car chases, weeping mothers, gypsies on the beach, and dancing thieves with a nearly straight face—and with Mr. Amitabh Bachchan in safari suits and denim jackets. Amitabh Supremo, indeed!

When it comes to the plots of 1970s Bollywood movies, my motto is, “Please, sir, I want some more.” Majboor obligingly throws every possible ingredient into the pot. Amitabh has not only a job supporting his family—including widowed mother, little brother (Master Alankar*), and wheelchair-bound sister (Farida Jalal)—but also a rich girlfriend (Parveen Babhi), a passing acquaintance with a tycoon/murder victim, and a probably fatal brain tumor. And that’s only the first half-hour.

But I get ahead of myself. The cops (the most senior of whom is played by, all together now, Iftekhar) come to the travel agency where Amitabh works to take a statement about the murdered businessman. AB tells them that the businessman had come to pick up plane tickets late one night, and afterward, when Amitabh had locked up the agency and was trying in vain to get a taxi in the drenching rain, had offered him a ride. We see Amitabh getting out of the rich man's car (Q: The rain's still pouring, and why is he getting out, as the the car appears to be in the middle of nowhere? A: Shut up, logic) and the tycoon driving off. Sadly, the police can’t see the flashback, so they warn Amitabh that they’ll be checking his story veeeery carefully. He isn’t worried, though, because he’s an honest, hardworking guy, and we know that his reason for getting out of the car in the rain in the middle of nowhere is to stop at a friend’s home to pay back a loan—you know, like you do after a late night at the office. (Q: Why? Because the friend, who clearly is not expecting AB, is desperate for cash? That night? In the rain? What, does his wife need an operation? A: Shut up, logic.)

Amitabh is a good guy at home, too, where we see him caring for saintly Maa, mischievous little  Billu, and sister, who loves to laugh. Farida tells Amitabh a joke, and the subtitles tell it this way: “There was a man who told that the fuse of his house was burnt. So he asked his neighbor, do you have any wires?” Hilarity ensues.

AB loves not only his family but his girlfriend, sexy Parveen. We see him standing her up for no very good reason (Q: Why? A: To give her a chance to be adorably angry, and for couple to have a song on a lonely beach--lonely, anyway, before the gypsy band and dancing girl appear.) Naturally, she forgives him.

Shortly thereafter, Amitabh has several episodes of the blaring music and jittery camerawork that signal a brain tumor in films like this. Oh noes! He even drops the aquarium full of fish he’s carrying as a gift for Life-Loving Farida (TM). (I couldn’t get over the fact that he was carrying an aquarium full of fish. Good lord, that must have been heavy. Q: Did the actual live fish flopping around in the broken glass on the sidewalk get rescued by some production assistant to flop again another day? A: Logic, you're making me sad now.) He sees a doctor, who looks at the brain scan and announces that it’s…. lymphosarcoma of the intestines?? No, a brain tumor. An operation? Well, that might leave AB a vegetable. But without it he'll die.

Amitabh concocts a plan to take responsibility for the murder so that his family can collect the giant reward. (Q: What? How would that work? A: Gotta agree with you on this one, logic.) Pretty soon, presto, he’s sentenced to death, leaving weepy Maa, Farida, and Master ji to sing this song:

Then in jail he collapses, and when he wakes up, he’s been successfully operated on—and he’ll live! (Q: Really? A: Shut up, logic.) But he’s sentenced to die, so he’ll die! What to DO? Escape and catch the real killer, obviously! 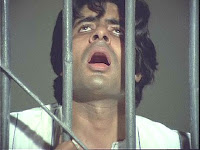 This reminds me that George Kennedy played a bumbling cop in the Naked Gun films with Leslie Nielsen and that his fellow officer, Nordberg, was played by O.J. Simpson. As always, everything connects to everything.

Anyway, after the hair-raising escape, Amitabh collects Parveen and, through fence Mac Mohan, meets up with Pran, who seems to be the killer but is in fact a thief with a heart of gold (and a secret knowledge of what happened on the fateful night). After some more twists, mostly involving Amitabh trying to evade attention while wearing a highly visible red suede suit with black patch pockets, Pran helps Amitabh and Parveen meet with the murderer in India’s loneliest riverside shack. 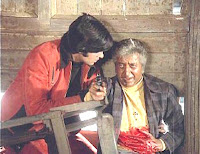 There Pran gets shot, and the subtitles memorably translate his anguished gasp as “My insides are all squashed!” Parveen stays back with Pran to help him hold his gun (I know what you’re thinking; stop it). Amitabh drives like a maniac to get a doctor and then drives like a maniac back. The doctor sits in the back seat raising not a single complaint about the car speeding, passing on blind curves, or flying over an embankment to avoid Iftekhar and his men. (Q: Why does the camera carefully conceal the doctor’s face? A: Presumably because he’s vomiting most of the way.) Too late to save Pran, but Iftekhar arrives in time to hear the killer exposit his way into a jail cell and clear Amitabh for a return to the bosom of Parveen and the family.

Amitabh dances Farida around in her wheelchair, and unlike O.J.’s Nordberg in The Naked Gun, she does not careen in her out-of-control wheelchair down the steps of a stadium. Everyone except the tycoon and his murderer lives happily ever after.

*While watching this I was thinking Alankar was the boy who so often grew up to be the Big B in 1970s films. But no, that boy was, of course, the taller, sadder Master Mayur. Instead of playing the Little B, Alankar often played the boy Amitabh needed to rescue (as in Don)--or arrived too late to save (as in Sholay). But whatever; the job of the boy in either case is to suffer and be quick about it.
Posted by LengelCJ at 11:03 PM No comments: