I'm working on something longer, and it's August, and I've been out of town. While I try to get the time and willpower and brain-focus to finish that other thing, I'm being reminded of this (just why will become clear when the longer thing comes).

You missed the Ossining Library Bollywood 101 series, but you can still enjoy the promo video! And you can still watch the gorgeous, mesmerizing actress Nutan in the luscious and terribly sad film Bandini through the kindness of strangers--and your video supplier of choice.

Posted by LengelCJ at 9:13 PM No comments:

BHAIRAVI: Goodbye to All That 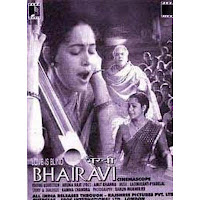 Bhairavi surprises by not being sentimental in the end about the things it seems to start off being sentimental about. Director Aruna Raje’s film is a Bollywood fantasy that makes a sharp turn into  parallel cinema, setting up intriguing questions about what we want, expect, and need from a romantic love story.

Ashwini Bhave (who was apparently considered quite the hottie in the mid-1990s) stars as Ragini, the blind daughter of a well-known classical musician. She and her singing are both beautiful, but this being India, she’s pretty nearly unmarriageable because of her disability. (The question of where this is in India seemed puzzling to me, as the people speak Hindi—not obviously dubbed—but the landscape and clothing look southern. Ah, well; what do I know?)

Her mother dies shortly after a last-ditch suitor turns tail on learning of Ragini’s blindness. And then her father dies in an accident, leaving Ragini alone. Well, not really alone—again, this is India, so the family retainer loyally stays on, doing the cooking and cleaning and putting the needs of her charge over those of her own (grown, greedy) kids. And although Ragini’s mother was pinching pennies at the start of the film, it turns out that the money Maa put aside for Ragini’s wedding festivities, combined with Pitaji’s savings from all the singing, has left their daughter with enough to keep the household running just fine. So Ragini teaches music to children, sits by a waterfall in a rainbow she can’t see, and goes out  on the river in coracles rowed by old fishermen just to enjoy the spinning sensation. The love she experiences is of the fond, not the romantic, variety.

Then along comes Rajan Swamy (Shridhar), a young man who, as a boy, had studied with Ragini’s father. When he learns that the father is dead, he asks Ragini to teach him to sing. And well is he named Swamy, for soon he is teaching her about Love. She resists, but not for long—he’s from a family known to her, and the retainer says he’s handsome. They get married.

This film seems not to have much of an online presence, but this sweet love song from the enjoyable Laxmikant-Pyaarelal score turns up, inevitably with the description “Ashwini Bhave HOT”:

The blissful interlude that follows offers a charming (and rare) filmi glimpse of a honeymoon spent in bed. Nosy auntie-jis storm in, intending to shame the couple for staying shut up in their room in broad daylight; since the couple are unshameable, the aunties end up fleeing with hands over their eyes. Still PG rated, but pretty bold for Bollywood!

A year flies by. One evening Rajan seems withdrawn. Ragini coaxes the truth from him: he has to go away again (he’s some kind of traveling salesman), and for a whole week—not just a day or two, as he apparently does regularly. She’s sorrowful, but she knows that he’ll cut the trip as short as possible, as he also apparently does regularly. He tells her that he’ll buy postcards when he arrives at his destination and send her one every day. She sees him off at the door. And because we’re conditioned to expect that something bad will happen after that setup, we worry along with Ragini when the postcards don’t arrive—and then, after a week and then two, neither does Rajan.

I remember reading the Laura Ingalls Wilder books as a child and thinking about how terrible the waiting would be if something had happened to Pa on the prairie or in the big woods. Who would tell the pioneer family, out in the wilderness with no telephone? The not knowing would be terrible. So I felt for Ragini as she waited and worried, unable to contact her beloved. (How cell phones have changed the world—and the plotlines.)

Finally, an uncle goes to Rajan’s office to inquire whether something has happened to him. O-ho, says the office manager pleasantly, were you taken in by that scoundrel too? No, no, the uncle patiently explains. He’s married to my niece. Well, he’s a scoundrel nonetheless, the manager says, and off goes the worried uncle to break the news to Ragini. She shakes her head: there’s a simple explanation. He loves me. He will return.

Conditioned as I am to Bollywood movies where people badmouth Our Hero but Our Heroine remains steadfast, I waited patiently, Ragini-like, for the revelation. But logic niggled at me. Is he dead? Well, why wouldn’t his office know that? Maybe some scoundrel is masquerading as Rajan. Perhaps, but where is the real Rajan in the meantime? Uh-oh, the jewelry is missing. Well, surely Ragini has just mislaid it. I do that all the time, even with the advantage of sight.

The uncle and the loyal retainer are convinced that Rajan has been a louse from the get-go and has taken advantage of the poor blind girl. They insist that Ragini should go to the bank and see whether anything is left of her savings. Indignant, off she goes. And the bank employee says, Oh, dear, I was so worried about letting him cash all those certificates. But you didn’t come in yourself, and he said it was all right. Umm, you still have 150 rupees…. Then Ragini, uncle, and retainer troop off to the police station to report the crime, and Rajan’s name elicits nods of recognition. Yes, that scoundrel! Ragini declines to press charges, and the policemen insinuate that it’s because she’s his wife and knew all about his schemes.

And still I waited for the explanation that would make everything all right. I figured Ragini needed to hit bottom in order to make the happy ending really sing. Come on--when have you ever seen a love song like that one figure in a story with a guy who really did turn out to be a scoundrel? At last, the uncle is told that Rajan has been arrested on one of the many charges leveled against him. Back to the police station goes Ragini to clear up this little misunderstanding. We see Rajan (it’s him, all right) behind bars, yammering on at the unseen copper about how his wife will bail him out because she’s a woman and she loves him and that’s what women do. Of course she’ll take him back. And Ragini enters, unseen by Rajan, and hears exactly what’s what. Ouch.

The simplicity of the explanation makes it hit a little harder. He is a louse. He doesn’t try to pretend that he loves her, or ever loved her. He’s stolen her nest egg. And he still expects to be bailed out.

And finally Ragini's eyes are opened to the truth. Instead of playing the loyal wife, she does what many a Bollywood heroine should have done before her: she tells the rotten husband that he is dead to her, wipes the sindoor from her forehead, and heads for home to start over. We see her, widow-like, handing her sarees out one by one to beggars along the path. The end of the romance really has the feel of a death scene—deliberate and wrenching.

The film concludes with one final scene of Ragini singing onstage before a rapt audience, intercut with shots of our heroine in the coracle, asking the fisherman to row her out into the river once again as in the old days. The song she's singing says, “The boat escapes the maelstrom.” The coracle goes with purpose, not spinning in circles, to the middle of the river, where Ragini solemnly removes her wedding necklace and sets it floating away on a lotus leaf. The crowd wah-wahs appreciatively.

I guess Ashwini Bhave closing the door on romance for good and all isn’t hot enough for YouTube, because nobody seems to have posted this song. Thwarting the romance-seekers among us, though, seems to be part of the movie's grand plan. Like its heroine, Bhairavi works to turn heartbreak into art.